Lucy - one of the most complete human ancestors 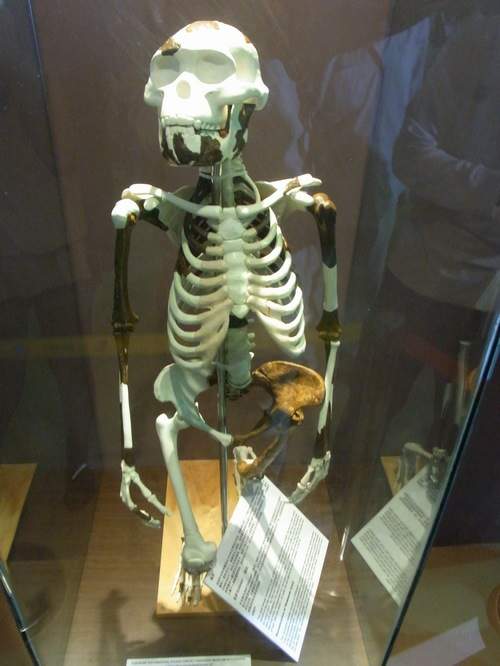 LUCY
This adult female skeleton is one of the most complete human ancestors found at a place called HADAR in the Afar depression(Ethiopia) in 1974. She was nicknamed LUCY after the popular Beatles song LUCY IN THE SKY WITH DIAMONDS. But the Ethiopians prefer call her DINKINESH(thou are Wonderful). The skeleton of LUCY is about 3.2 million years old. Her brain was no larger than that of the Chimpanzees but, she walked on two legs, a character placing her in the family tree of man. She was about 1.10 meter tall and died at the age of between 18 and 25.

Reconstruction of "Dinkinesh": (Lucy)
The recovered skeletal remains of “Dinkinesh”(Lucy) comprise about 40% of her whole skeleton.This complete reconstruction is made possible by mirror imaging the parts represented in either side of the recovered 40%. Other entirely missing parts were reconstructed based on available skeletal elements of other individuals of similar size belonging to the same species (Australopithecus afarensis) as “Dinkinesh”(Lucy). Although Lucy was fully adult, she was only about 1.1 meters tall when she was alive. This reconstruction shows her actual height.
Related Articles

A Class for Managers in Shanghai World Expo Site

The Luo homestead in Kenya

World Famous College Students will perform for Expo on July

Lecturer of English and Western Culture wanted at shisu